Review: About The Author – John Colapinto

To start with a gross generalisation, there’s little more interesting to writers than writers, and the most interesting writer to any writer is themselves. We marvel at our own artistic process, the way we can torture ourselves and hate ourselves and bleed into the page, and create unreadable rubbish and then – on magical moments – emerge with words of true genius. Words we may not even remember writing, but which speak to humanity with truth and ageless wisdom.

It’s the allure of the artist, the god creator, world builder, and purveyor of lies and truth in equal measure.

And we write about ourselves, and then lie about it.

Experience colours what you write, and I am written into every line of sin and murder in my own books. By dint only of having written them, of course (not, I hasten to add, due to having done any of that stuff). Perhaps that’s because I’m a ham writer, but perhaps it’s just the nature of being human. We can never fully dissociate from ourselves. 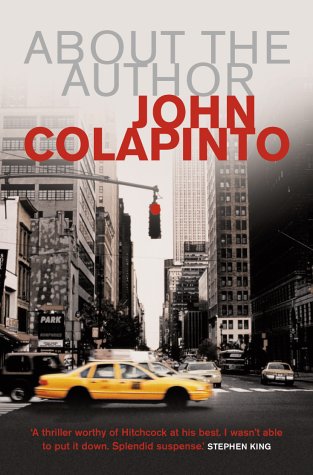 Enter About The Author, a Hitchcockian thriller about precisely that – the separation of the story and the writer.

Cal Cunningham lives a debauched life filled with hollow love affairs, only so at some point he can write the next great American novel about it all.

He doesn’t write a word for years.

Unbeknownst to him, his quiet flatmate Stewart harbours his own dream to be a writer, and has written a novel based on stories Cal has told him, even using Cal’s title – Almost Like Suicide.

Following a freak accident which claims Stewart’s life, Cal feels no qualms about stealing the manuscript and passing it off as his own. He is the protagonist, after all! Never mind that Stewart’s skilled prose far exceeds anything Cal could hope to have matched.

What follows is a tense path to fame and riches, followed by increasingly desperate actions on Cal’s part to try and prevent his fall from grace.

Let’s not beat around the bush – Cal’s an asshole.

An unmitigated asshole. He is selfish and self-obsessed, and the bruising of his ego at the discovery of Stewart’s hidden talents is the catalyst for the hot mess of Cal’s ascent to the glory he thinks he deserves, but has yet to earn.

But Stewart, the poor, wronged genius taken too soon, is also an asshole, and so too are most of the people in the book. Yet in spite of all this assholery, I found myself warming to Cal. I wanted him to succeed because by the end, boy did he work for that success. As to whether or not he gets it, I’ll leave to you to find out.

About The Author is a masterclass of rising tension, and a pleasantly uncomfortable read.

See if you agree here, and I’d love to know what you think!