Coming Home, a Mystery of Lies and Ladies

Some books just grab you. I spent about a week dipping in and out of a not-particularly-interesting book, then started Coming Home. I wanted something exciting, something a bit dark, and this seemed to fit the bill. 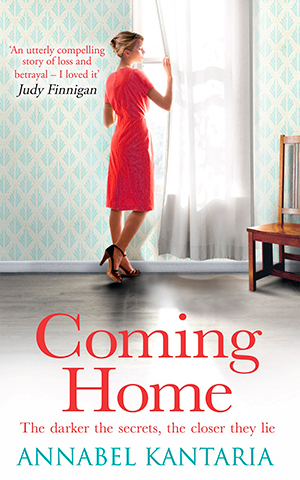 Hey, if Judy Finnigan loved it…

Boy, did it ever.

Evie, 28, has lived in Dubai for 5 years. She left London to escape from the shadow of her brother’s death, and the demands of her unstable mother. She’s had the time of her life, finally free from the emotional shackles of her family and able to become her own person at last.

Then her father dies.

Evie returns home to face not only her father’s death, but also the mother she left behind.

Struggling to cope with a grief she isn’t able to express, Evie begins to uncover her father’s secrets. These are revealed in tandem with flashbacks of therapy sessions Evie had as a child following the sudden death of her brother. Every page seems to bring new questions, and what would be a main plot twist in another book is just another layer in this one.

Who did her father transfer enormous sums of money to, just before his death?

Where did her father really go during the week when he said he was away working?

Why did Evie’s father not tell her about the cancer which had got so bad, so quickly?

Why doesn’t Evie’s mother speak to her brother?

And most importantly of all, how much did her mother already know?

I got a real sense of the confusion felt by Evie as she discovered hidden truths and faced memories she’d deliberately buried. Having spent her life trying to help her parents at the expense of her own grief, Evie’s shock and confusion at being lied to is palpable. In a world which places so much emphasis on the sanctity and perfection of a mother’s love, I am always interested in stories regarding the significant absence or abuse of that love.

It’s an emotionally complex book, and I welled up several times while reading. I had to read it all in one sitting. We lost someone a few months ago, and the grief in this book rang so true. It brought back everything I’d felt during that awful period. It was a difficult read, but a worthwhile one.

The numbness of grief coupled with having to grapple with what, at the best of times, would be overwhelmingly difficult truths, are sensitively and honestly brought to life by Kantaria’s delicately woven prose.

I couldn’t put this book down and raced to the conclusion, only to find myself left with a moral dilemma. The question of all questions – how far would you go to protect your family? I know which path I’d have chosen.

Why don’t you find out what you’d do?

The best mystery I’ve read in a long time, and one I recommend highly. Read it now, so I can talk to you about it!

And if you like it, you may also enjoy The Disappearance – another mystery of lies and ladies by the same author.

In Twenty Years – How Not to Waste Your Life